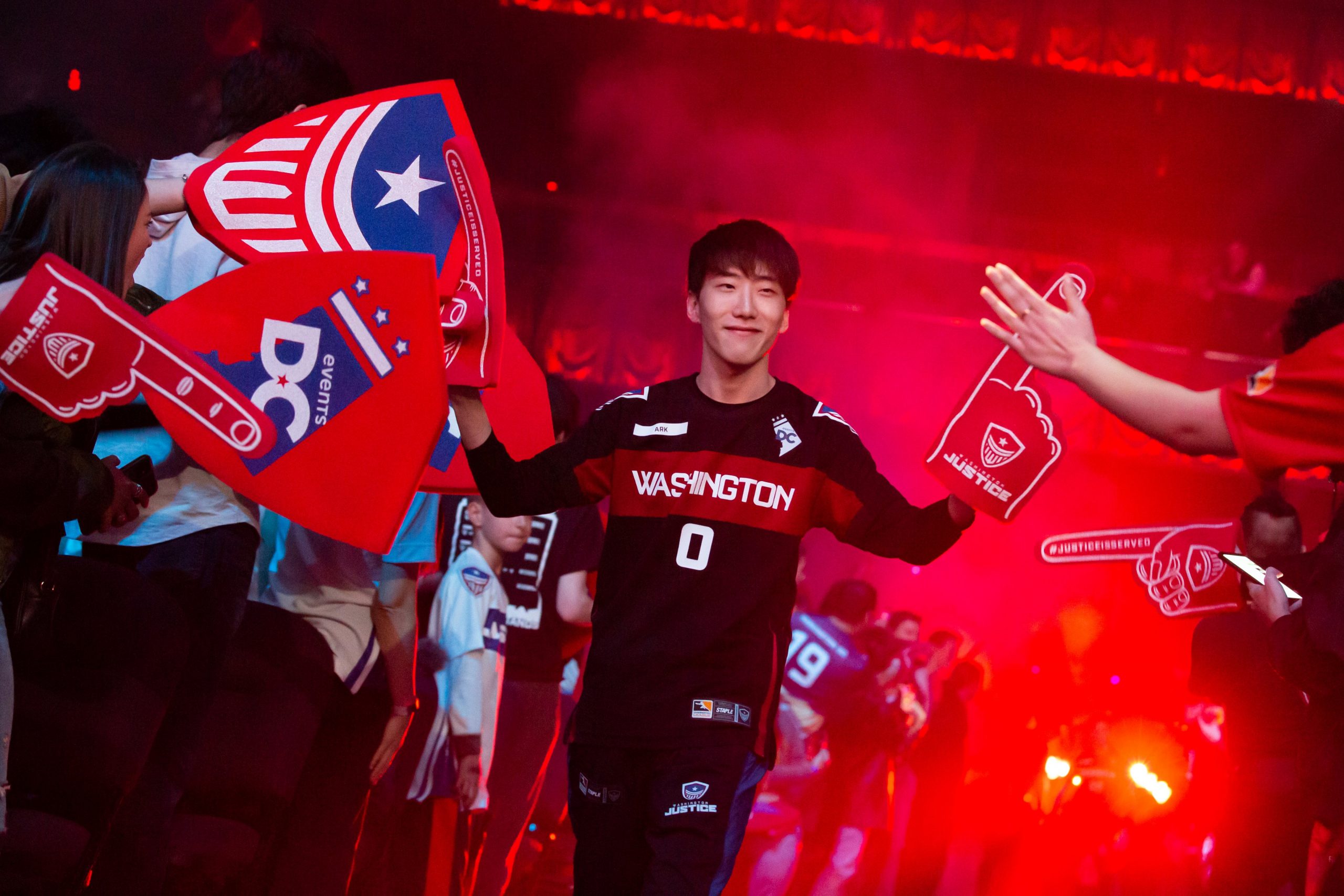 The Washington Justice hosted their second Homestand of the season this past weekend and only walked away with a win. Saturday was a short series of matches whereas Sunday kicked off with an intense five map series which led to a halt in the Fusion’s win-streak. This was the first week of Hero Pools, and with McCree, Widowmaker, and Reinhardt being banned, the hitscan dream died.

The first match of the weekend was the Toronto Defiant versus the Florida Mayhem, and this was the first showing of what the meta would look like. The standard roll out on Busan from the Defiant was Tracer and Soldier: 76 as the damage heroes, Winston and D.Va as the tanks, and Brigitte and Zen as the healers. On the side of the Florida Mayhem, they opted for a beefier composition featuring Soldier: 76 and Mei as damage heroes, Orisa and D.Va as tanks, and Ana and Brigitte for the healers. It was difficult for the Toronto Defiant to break through the Mayhem, but once Pan-seung “Fate” Koo on Orisa fell, it became significantly harder for the Mayhem to maintain their hold. It was a beautiful sight watching Andreas “Logix” Berghmans flex on Tracer, but it wasn’t enough to get the win. Junkertown was a clear disparity in skill with the Defiant being held at the first point, and in following matches the defensive style of the Mayhem was stronger than the Defiant’s aggressive dive.

The Paris Eternal had a disappointing day on Saturday, essentially handing the Houston Outlaws a clean win. This match featured some altered compositions that played to the Outlaws’ strengths when it comes to a hyper-aggressive dive composition. The team opted for a Tracer, Sombra, Winston, D. Va, Brigitte, Zen lineup for the power that it gives in disabling enemies and jumping on them to gain the upper hand. Sombra and Brigitte focuses on disabling a specific enemy, usually D.Va, and the rest of the Outlaws would jump on them, forcing Paris to devote everything to keep their tank line alive. Austin “Muma” Wilmot and  Dante “Danteh” Cruz together provided excellent pressure on the backline of Paris, and overall they looked better composed in the long team fights. Muma is as skillful as ever on Winston, and on Eichenwalde, he jumped into the backline distracting the Paris Eternal while his team gained free cart time. Nicolas “NiCOgdh” Moret’s Sombra fell short and didn’t give his team proper openings to make a difference. On defense, Jeffrey “blasé” Tsang on Soldier:76 maintained his distance and picked at the team not allowing himself to be dived.

The last match of Saturday night was the Washington Justice making a fool of the Boston Uprising despite Tae-hee “Jerry Min’s  best efforts. When watching the opening map, it may not have seemed so one-sided, but things rapidly fell out of sync for the Boston Uprising. Corey “Corey” Nigra had better success on tracer than any other hero he played over the weekend, even though it took him some time to find the groove. His main utility for the team was forcing the Uprising to make mistakes and panic, which led to misplaced ultimates, low effort dives, and an inability to regroup and collect themselves. This was the Washington Justice’s first win at home despite this being their second Homestand of the year, but they were not so lucky the following day.

After the half-time break, the Fusion came back with a vengeance and began their path for the reverse sweep. They had no plans to leave the weekend without a few map wins under their belt and the duo of Jae-hyeok “Carpe” Lee and Kyungbo “Alarm” Kim thrived when Alarm was able to place a discord orb onto his damage players’ target. The last map on Oasis was gripping with each team trading members even until the very end. The Paris Eternal were slightly better equipped dealing with the scrappy fights, whereas the Fusion works better as a solid unit with damage players being enabled by their support line. The status of the Eternal is questionable after their performances this weekend, and it may be that the team is not as adaptable as many previously thought. The Outlaws are known to thrive with Sombra, Doomfist, and Tracer, given their takedown of the Shock last season. The Fusion walked away with their first loss of the season but still showed that they never roll over without making the enemy work for it.

The Washington Justice coming out against the NYXL on a weekend where Sombra and Tracer are the meta is scary dangerous for any team. Map one on Busan was a more aggressive dive from the Washington Justice with Corey and Jong-ryeol “Saebyeolbe” Park playing Tracer ring around the rosie for a majority of the match. Things took a turn when Yeon-kwan “Nenne” Jeong swapped in for the Tracer role and he hunted down the hometown hero with ruthless accuracy. The rest of the NYXL followed this pattern and Dong-gyu “Mano” Kim jumped onto the grouped up Justice often, forcing them to focus on the aggro Winston instead of Tracer. In previous matches, we have seen the Sombra be the driving force at controlling the pace of team fights, but in this match-up, Sung-hyeon “JJoNak” Bang brought out Ana and used his sleep darts to ensure that Ethan “Stratus” Yankel couldn’t get off his EMPs and hacks on Sombra.

The weekend didn’t get any better for Boston in their second match of the weekend against the Atlanta Reign. Last week the Atlanta Reign wiped the Toronto Defiant out with a clean sweep 3-0 and then dropped their second match against the Paris Eternal, looking like a completely different team in each series. Atlanta was hot on Sunday going up against Boston, with former Contenders tank Xander “Hawk” Domecq proving to be a formidable D.Va, hunting down low health targets and throwing himself in the face of the enemy disorganizing pushes before they began. The Atlanta Reign’s Tae-Hoon “Edison” Kim came out and played Reaper for a bit applying pressure on shields and tanks, not allowing them to push forward and engage for fear of the damage that the ethereal hero can pump out.

To be fair though, this series was less of the Atlanta Reign being completely dominant over the Boston Uprising, and more so a lack of control, focus, and discipline from the Uprising. Sloppy ultimates, a weak backline, and the inability for anyone besides Jerry to make an impact all led to their defeat. A major failing point for Boston was Walid “Mouffin” Bassal’  choice to play Sigma instead of D.Va or Winston which seemed to be the meta for the weekend. Sigma doesn’t provide nearly as much utility as the other off-tanks of choice currently, and he was unable to apply the pressure his team needed to keep the Reign from dismantling them with ease.

The Hero Pool bans added diversity to the Overwatch League and brought with it a nostalgia for the dive meta we saw before GOATS took over everything. Despite Widowmaker and McCree being banned from play, there was still excitement for the matches, and we got to see which teams are open and able to adapt versus those who need more time preparing for meta changes.

Going into week six, we have a new set of heroes being removed from the pool shaking up the meta once again. This week we will not see Winston, Lucio, Sombra, or Soldier:76 make their way onto the big stage, essentially reverting the meta to the first month of the Overwatch League. This week’s matches are hosted by the Florida Mayhem and will bring out the NYXL, Atlanta Reign, London Spitfire, Philadelphia Fusion, Paris Eternal, Toronto Defiant, Washington Justice and Boston Uprising.