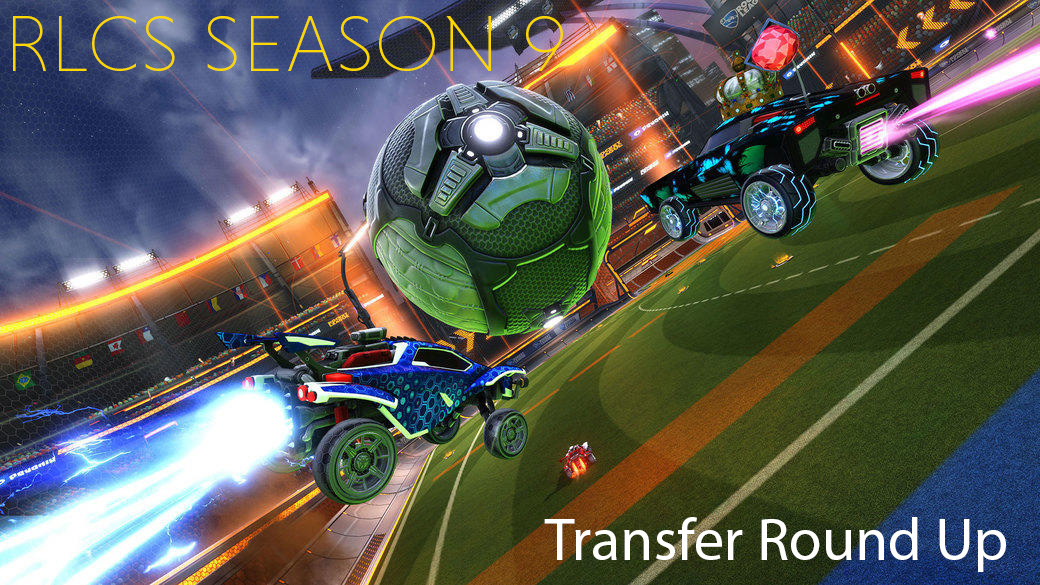 It’s been just four weeks since NRG lifted the Season 8 Championship, but preparations for next season are almost over, on Saturday 19th of January the roster lock is put in place – meaning teams can no longer sign or trade players. In time for the beginning of RLCS Season 9 League Play which starts on February 1st.

This season is set to be the biggest in Rocket League history with the NA and EU league’s expanding from 8 to 10 teams – which means more games, more potential for upsets and more chances to see the best players in action. But where will they be playing? If you haven’t been able to keep up with all the moves over the holidays we have put together a round-up of all the transfer before the start of RLCS Season 9.

What started as a relatively quiet off-season gained steamed after the new year and with a number of big transfers made between teams, new organisations entered the game and some decided to give their players another opportunity after less than stellar seasons.

It may come as a surprise to those that only look at the results, in three seasons with Team Vitality, Kyle “Scrub Killa” Robertson won the RLCS Season 7 Grand Finals and finished runner-up to NRG, last season. However, the problems that the Scotsmen has had with his French teammates has been well known for a while, simply not able to create lasting friendships in a second lanuage. That is why even if Team Vitality won last seasons final, he would still be leaving the side.

Taking his place will be TSM’s Yanis “Alpha54” Champenois, the Frenchman will team up with Victor “Fairy Peak” Locquet and Alexandre “Kaydop” Courant to form an all French side. Part of the thinking in this is to prepare for the first Intel World Open (IWO) Live event which is scheduled for June. This tournament is in partnership with the Tokyo 2020 Olympics, and similar to the Olympics, teams are expected to field players exclusively from their countries.

In the world of esport organisations Endpoint may not have the prestige of a Team Liquid or FaZe but in their four year history the UK-based outfit have shown real ambition – they have one of the most decorated UK CS:GO teams and the world’s best Battalion 1944 side. As well as players and representatives in Quake Champions, Overwatch and Rainbow Six: Siege.

Now they are entering into the world of Rocket League for a second time – signing newly promoted EU side Discombobulators, who finished 2nd to AS Monaco Esports in the Rival Series.

This roster are a young side, which much to prove and look to be the perfect fit for an organisation on the up.

FCB burst onto the season in RLCS Season 7 playing a high-pressure forward thinking game that surprised many and netted them a 2nd place in the EU regular season.

They haven’t quite been able to hit those heights since then but it certainly wasn’t due to the form of recently released Dan “Bluey” Bluett. Last season he was awarded the Clutch Playmaker, Regular Season MVP and came 2nd in Golden Striker – in a team that ultimately didn’t even make the Grand Finals.

Whatever the reasons for his departure FCB, wasted no time in announcing his replacement signing Hrant “Flakes” Yakoub after he left the relegated and ultimately disbanded Complexity Gaming roster.

But what about Bluey? We’ll he signed for the reformed Triple Trouble with Euan “Tadpole” Ingram and Rix “Rix_Ronday” Ronday.

It’s business as usual at G2, Cloud 9 and Dignitas

Two teams that looked the most likely to make moves were the ones that did the least. Last season the North American powerhouses of G2 and Cloud 9 both found themselves fighting for their lives in the promotion play offs, after a poor regular season saw them finish bottom of the table. However, after both secured their place in the RLCS they opted to not to make changes, but stick with their rosters.

Was last season an aberration and will this show of faith be rewarded? Only time will tell.

Another side who haven’t made any changes are two-time RLCS Champions Dignitas, their performances gradually improved throughout the season and they performed well at LAN with Maurice “Yukeo” Weihs, in particular, impressing. So it is perhaps no surprise that their biggest announcement was the retaining of the man from Austria.

Firstkiller moves twice & the best of the rest.

Jason “Firstkiller” Corral has quickly made a name for himself in Rocket League and by becoming the first player to move organisations twice in the off-season. Initially he signed for Ghost Gaming afterthey release Michael “Memory” Moss, replacing him with the 15-year old. What happened after that is not clear, there are clips of firstkiller from a few years ago of firstkiller using racist lanuage, whatever prompted the change, firstkiller found himself off Ghost and signing for Rogue. Ghost gaming moved quickly to pick up Nick “mist” Costello, previously of the Pittsburgh Knights.

Elesewhere Team SoloMid signed Mognus from Complexity Gaming and Pittsburgh Knights picked up Austin “Ayyjay” Aebi from Rogue as a replacement for Mist.

What did you think of the RLCS off-season? What teams improved? Who should of done more? Let us know via Dart Frog’s Twitter, Instagram or Facebook.