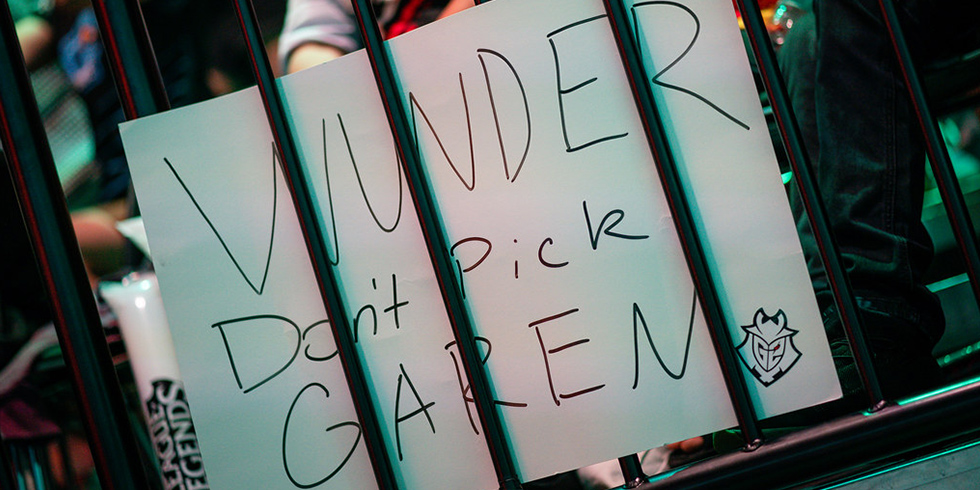 Week 7 of the LEC Summer split was a weekend of highs and lows for G2 Esports. The reigning MSI and European champions are unstoppable in their current form and are on track to easily surpass their 13-5 spring season. That is until a single odd draft choice threw a spanner in the works.

After going 1-1 this past weekend against playoff hopefuls Team Vitality, and rivals Fnatic, the team has come under criticism about how seriously they’re taking the game. After apparently heeding the advice of a fan sign, G2 opted to pick Garen for Martin Nordahl “Wunder” Hansen in the top lane in Friday’s game against Vitality. What followed was a harsh loss, as the questionable champion choice came back to haunt them. Early in the match, Wunder was even seen reading his abilities, suggesting a lack of familiarity with the Champion.

After the game, ADC Luka “Perkz” Perković explained. “Sometimes we have ‘happy’ games as a team. This time it backfired.” G2 has become infamous for its off-meta picks, with the team’s Pyke, played in any and all roles, being of particular note. The team has a unique knack for finding something that few others are playing and using it to significant effect. The Garen pick, it seems, was one step too far.

No one is about to suggest that Garen is a viable competitive pick. But dependant on your ranked division, there are arguments for situationally picking him up as a counter to a few match-ups. However, the fact remains that unlike many of the champions currently prevalent in the top lane, Garen lacks the hard crowd control, cross-map pressure, and the raw damage that the likes of Kled, Gangplank or Karma bring to a comp.

“Sometimes we have ‘happy’ games as a team. This time it backfired.”

And still, the Garen pick wasn’t a “troll pick” in the truest sense of the word, because G2 played it to the best of their ability. Marcin “Jankos” Jankowski ganked for his top laner and did everything they could to stop a snowballing Karma from taking over the game. What’s more, Vitality is by no means a bad team, and losing to them in any circumstance must be partially attributed to the quality of their players. G2 should even receive praise for how well they played despite the noticeable handicap.

Regardless of your feelings on G2 and their wild Garen pick, against Fnatic the next day, they were redeemed. In what had been heralded as a marquee match, the team quickly dispatched their chief competition for the EU top-spot. And with it they showed that when they’re picking champions they actually know how to play, they’re probably the best team in the world. With Mihael “Mikyx” Mehle on Pyke, and the rest of the team on comfort picks, the team dispatched their opponents in around 25 minutes.

Regardless of the result, neither of these games were completely awful performances. Both showcased the individual skill of a team that’s on track to have one of their best-ever seasons. And even in their loss, G2 showcased remarkable fortitude, holding off Vitality far longer than expected. The team was also in prime position to turn the game around after giving up early kills, but the flaw in their draft proved too much to overcome. What the “happy game” illustrates is that G2 always has the potential to win, even when they’re artificially handicapping themselves.